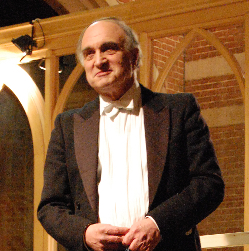 Geoffrey Hanson
In 1997 Geoffrey Hanson founded the East Finchley Arts Festival, an annual event at which the London Mozart Players have premiered three of his works written especially for them. Hanson’s Conversation Piece for violin and `cello soloists with orchestra was premiered by them at the 2006 Festival with soloists David Juritz and Sebastian Comberti. His Piano Concerto No. 2 was premiered at the 2007 East Finchley Arts Festival by Rimantas Vingras and the London Mozart Players, with the composer conducting. Hanson’s career has taken him to Paris, Italy and the USA both as conductor, composer and recital organist.